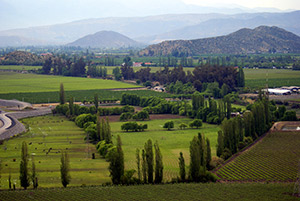 Conde de Velázquez wines have been Estate Bottled by the well-established Viña San Esteban of central Chile's Aconcagua Valley since 2002. This premium wine line is available in North America as the result of a joint venture between Agricola Del Conde of Santiago, Chile and WTWM Imports of San Angelo, Texas whose principals have partnered in agribusiness export over their 30-year friendship. Agricola Del Conde established the Conde de Velázquez export label with Viña San Esteban using WTWM Imports as its exclusive importer and marketer to the North American region. 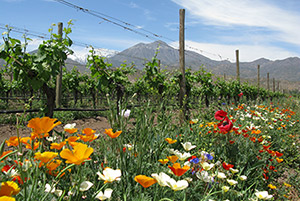 The town of San Esteban lies in the upper Aconcagua Valley and extends up through the Andes Mountains to the Chile-Argentina border, near the towering peak of Mt. Aconcagua (22,835 ft.). The mountain breezes that fall upon the vineyards of San Esteban (3,018 ft.) help to mature grapes with unique qualities that become ripe, elegant wines that bear the true mark of Aconcagua.

The first haciendas dedicated to wine production began to appear shortly after Spanish settlers populated the area in the 16th century. The haciendas were responsible for developing a family-based work system and a distinctive architectural style that lend San Esteban a charming colonial air. Dating back even further, native cultures influenced by the Incas and later by the Mapuches left important marks in San Esteban. The hillsides of Paidahuen, which means "Good Place" in the native tongue, are covered with rock drawings and petroglyphs. This archaeological site, which is one of the most accessible of its kind in Chile, holds a deep significance for the people of San Esteban. 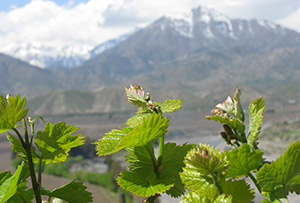 The history of Viña San Esteban is the latest, inspiring chapter in the rich legacy of this "Good Place." In 1974, José Vicente bought the La Florida and Paidahuen estates for grape production. Twenty years later, his son Horacio Vicente Mena, a Bordeaux-trained winemaker who has worked in California and Bordeaux, joined José to unite both grape growing and winemaking.

Viña San Esteban is a pioneer in hillside vineyard plantings in Chile, dating to the early 1990s. The Mt. Paidahuén vineyard grows in rocky soil and receives optimal sunlight, ideal conditions to produce grapes with good structure and character. At the bottom of Mt. Paidahuén, the Aconcagua's riverbanks provide fluvial soil composed of drift stones and fragments of rock from the Andes. The light texture of the soil regulates water retention and excess vigor, encouraging the concentration of aromas and tannins in the grapes.

Chile is ideal for organic wine production because of its natural geographic barriers: Atacama Desert to the north, Andes Mountains to the east, Patagonian ice fields to the south, and the Pacific Ocean to the west. These natural element combine to naturally reduce pests and disease. The Aconcagua Valley is sheltered by Mt. Aconcagua, the tallest mountain in the Americas, located along the glacier-fed Aconcagua river. This area produces top quality Cabernet Sauvignon, Syrah, Carmenère, and Sauvignon Blanc.