The Melone brothers, Vinny and Mark, weren't into wine in the 1980s. They were following in their father's footsteps, teaching small ranchers in South America how to salt and preserve hides of sheep and goats to sell to San Angelo Wool Processing/West Texas Wool Merchandising, their family company that processed wool, mohair, and pelts for the textile and leather industries worldwide.

The Melone family helped make San Angelo the "Wool Capitol of the World" in the mid-20th century. In the 1980s, Vinny, the older brother, spent the better part of two years working the business in Chile. He befriended Roy Schneider, a businessman with interests around the world. Schneider had property adjacent to Jose Vincente, who raised table grapes but aspired for more.

In the 1990s, Jose sent his son, Horacio, to apprentice with Baron Philippe de Rothschild's wine operations in France. Horacio returned and the Vincentes began building Viña San Esteban in partnership with Roy Schneider. In early 2000s, Schneider asked his friend Vinny if he wanted to do some wine business in the U.S. in addition to hides and hair. Intrigued, Vinny and his younger brother, Mark, decided to give it a shot. "Times were rough in our business, so opening a second operation was attractive," Vinny remembers. "Because we had been importing and exporting for so many years, getting permits was surprisingly fast and easy," Mark notes. In 2003, the hide and hair boys became the exclusive distributors of Viña San Esteban wines in North America, labeling them Conde de Velázquez (after a character in Chilean folklore).

"In the beginning, we were the next new thing and it was easy," Mark says. "Then a few years later it wasn't so easy and we struggled. You learn more from adversity than from success, so we had a lot of learning opportunities. The past four years have been pretty good."

"We import about 5,000 cases a year," Vinny says. "We expect to double that in the next two years."
"We also will be moving into Chilean beer, olive oil, and balsamic vinegar," Mark adds.

Amid all the flutter of wine success, the Melone boys have not abandoned their leather and textile business roots. "Hide and skin is still half of our business," Vinny says. "but beverage and food is the upside." Conde de Velázquez wines are distributed nationwide by WTWM Company, San Angelo, Texas. The Melones have a Texas exclusive on Rio Alto, the winery's second label.

"Conde is French oak, more European style," Mark says. "Rio Alto is American oak, more California style." "It's been quite a ride," Vinny says. "The good Lord has smiled on us, and we enjoy putting good wine on tables of our neighbors and people all over America."

"And who knows," Mark laughs, "some of our wine drinkers may be sitting on chairs or wearing coats made with hides and pelts that went through our warehouse. Life can be amazing in San Angelo." 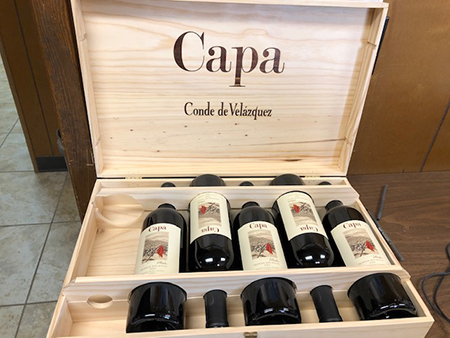